Connor Addison in his studio Photo: Courtesy of the artist

And into the melancholy fantasy, we bare our sentiments, devoid of distraction and static. Here within the composition of Connor Addison’s works, we convene quietly in tranquility to ponder and consider the occurrences of yesterday, the recitations of our reason, and the delicate stillness of awakening.

Connor’s canvases release a call for empathy for those who welcome it. There’s just this beautifully ethereal tone about it, yet it’s incredibly grounding at the same time.

In certain paintings, the subjects seem to be in an alternate, a quiet plane in the sky, where their silent communication reflects what is in one world we all belong to, where everything at some point is a part of everything else.

Connor Addison is a British painter living in Barcelona. He will have his first solo exhibit in the United States this week at Aktion Art Gallery in Palm Beach. In his interview, we spoke about everything from quantum principles to the humbling moments that connect all of us through the expression of the artistic soul and how the universe continually unfolds from our lessons of love, loss, and hope.

VS- Your pieces are so beautiful and have a retro feel to them.

CA- I’m trying to evoke this idea of a fresco, a narrative, and allegory, so the colors are quite subdued. They kind of reference religious art a little bit because I believe in innovation and change so much. Still, I also think it’s good to honor what has happened before, in some ways. The lessons are there. It’s kind of a relaxing historical relation trying to take tiny elements from different parts of history and bring them together without it being evident that it’s one thing or another.

VS- How do you transmit a mood so modestly?

CA- “I’m kind of trained as a philosopher, so the work begins maybe four months before it starts with an existential problem or some unknown part of my emotional pain and trying to dwell on that and understand that. So there’s a whole subconscious process before.

VS- Do you feel like you’re solving something, As you’re painting? There is a release of tension in the energy of the works. You can feel the untangling of something that was perhaps tying you up inside.

CA-Yeah, in some sense, it’s definitely existential therapy for me. It’s this process of making these big questions that are pretty scary externally, and then stepping back and being like, “Oh, this isn’t so scary.” So, you see, it’s not this kind of formless psychological experience or something you to control, but it’s expression bringing color to something. It kind of takes its teeth out in a way.

VS- Do you feel like you get over a hump in a way once you do the work?

CA- I mean, to be very personal, at the same time I decided to work full time as a painter, I broke off from a six-year relationship with another artist. And then, COVID happened. So, it was kind of this slap in the face. I looked at other people who had had breakups who seemed to escape with drinking or denial, not wanting to feel all this is intensity. I wanted to feel it, to experience it, so it was kind of like a way of not avoiding it, in the sense of getting over this. Being alone during COVID day after day was a meditative experience. It is an expression of someone’s psychology, and investigating that is vital.

VS- Do you name your paintings?

CA- Most of the time, I’d say the name comes 80% of the way through: by listening to audiobooks and psychology on the topic. I may hear a snippet or find my own kind of word or phrase. It’s a continuous discovery. One of the more recent works was really big. It took me two months to understand it. You want to say something yet; its presentation is different. It tells another story sometimes. It always makes me appreciate the role of the subjective viewer in whatever an artwork means because my intention is just a small part of it, and even my intention doesn’t intend what it means to intend!

It’s one of the most humbling things. For my solo show, someone was crying, and I stood next to him, saying, Are you okay? And he just told me a whole story about his life, and it was super humbling like, you know this is what I’m looking for, to evoke this in other people.

VS- Tell me about your colors. You have such beautiful colors.

CA- It’s a strange thing because some things have unusual origins. The colors came from When I was 15. I was copying the style of castles, and on the table was Cath Kidson, and it’s like a British design that is sickly sweet and feminine. And it has this kind of pink, blue, contrast, and I became interested in that contrast, and it just evolved into like an obsession with this terracotta and pink, I really, really love. So it came from a very strange angle.

VS- You feel like you can almost crawl inside with the people.

CA-Yeah, that’s kind of the idea as also I don’t put my signature on the front because I want it to be a window. Paintings are windows. I like this illusion of entering and having it take up your whole field of vision and be really absorbed by it. Of course, you can present the same message in a smaller form, but it’s that kind of phenomenon. It has a way of drawing you in. It has this life-size gravity.

VS- You can sort of have an internal conversation with it because it’s right there. The world behind this screen is so powerful, as this is not what everybody sees, and there’s a strength to being vulnerable, which most people never show.

CA- Yes, that’s exactly where I’m coming from, really, it is! A lot of the time, in film and art, in general, it can have a function of escape, like, you go into fantasy worlds, and it’s beautiful, and it’s like, wow, I want to be here! But for me, I want to amplify and make it a safe space to explore reality, not escape it. It is another window to another world, but it reflects so much of the stuff we’re afraid to talk about. For me, it should be a function of art to facilitate conversation and connection between people, which is what I try and bring out in people.

VS- If the soul could have a TV station, maybe this would be one. How old were you when you started?

CA- Well, I mean to go back some time ago, I guess the genesis of this style was when I was maybe 17. I went to Central Saint Martin’s in London, and they gave me a lot of theory and philosophy, it was quasi-intellectual, but it wasn’t quite there for me in some way. So I knew I wanted to do this style, and they told me, No, don’t do it; it’s rubbish. So I went on to study politics, philosophy, and economics. I wanted to learn how to think!

Then it turned into, okay, so I can apply that to the visual language. It was intensely academic to study quite hardcore aesthetics and phenomenology and all these kinds of things, but in the end, even though it took me a long time to start, it was very valuable.

VS-Like writing an essay, your essay will come out a lot easier once you study.

CA- Exactly, exactly. And I also thought it was weird. I think to be an artist; you need to be innovative in a vacuum. But, you do need influences. Everyone was copying a little bit from each other at school, and it became a slight average. And for me, it’s always been about discovery and pushing frontiers, and discovering new things. It doesn’t have to be world-changing, but it needs to add something incrementally. So it was like, I want it to be in a vacuum!

VS- There is a simplicity and humbleness to your work, and maybe you go so grande to feel the humbleness?

CA-Actually, that is exactly what it is. When I do my work, and I’m in front of the canvas, I almost duck my head in service to the work. I am in service to this work. It’s not serving me. The only way I can ever finish a work is to understand the task at hand, respect it, and know its control over me, which can be oppressive at times. Two of the most valuable skills as an artist are humility and patience. If someone asked me how do you paint, it would be those two.

VS- Tell me about your thoughts on actualization, evolving as an artist, and how that transmits itself into the work you put out.

CA- I was exploring a philosophy of action, a lot of people say, “I’m an artist, I’m a musician,” and they make one song in a year. The psychological event is very easy. The becoming is really where all of it is. It’s not complex. It is going from minute to minute to becoming. Awareness and consciousness really do define all existence. One of the most beautiful thoughts is realizing that we are just the universe trying to understand itself. First, there was a universe, but it was almost unconscious, and by our mere act of becoming aware, the universe became aware of herself. We are the materials of the universe. All of this is manifested. You can look back and say, this is the sun, the big bang, these are atoms, and it is fascinating. I feel like there is no end. If you go deep enough, it almost gets inverted. You get to that frontier, and something else is there, and is it made by us? All of my art is about everything in a sense.

There is a deep retrospection that says so much of who the artist is, a heartfelt thinker. On his canvases, he transports us to a space where we may have left a piece ourselves, a spot we long and wish to stay, or would perhaps willingly forget if given a choice—a place where healing is occurring, which is quite beautiful. Good art secures silence in its proximity. Great art will trespass thought patterns and reset headspace, even if just for a moment, and that’s what his art achieves.

It's toasty in the studio where I am sitting with Chuck Close and Cinnamon, his. Continue reading

Mòyósóré  Martins waits with his hands on the canvas and asks, Why?  When he receives the message, he. Continue reading 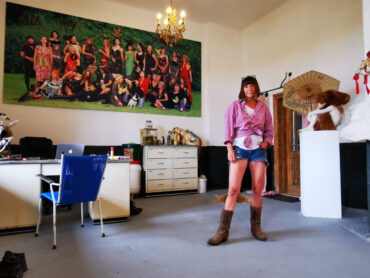 "But that’s also what art is about, I guess - at least to me. Being radical and leaving something behind."