Mel Bochner on the outside of the Haus Der Kunst

Something magical and profound is happening right now in Munich, Germany, at the world-renowned art institution, Haus Der Kunst.

Printed on an elongated banner, one of his word pieces is sprawled atop the entire cornice of this imposing, neo-classical building across from the Englischer Garten. On its surface, that’s it: a banner on a building. Not much to see here, volks. Worse, the words are neither in German nor English, so anyone picnicking in the park out front where Hitler enjoyed a parade or two would be a bit perplexed in deciphering the meaning of them. But for more than fifty years, Mel Bochner has been putting the concept in Conceptualism. To fully grasp the depth of his art, to unravel Bochner’s true brilliance on this occasion, we must investigate well beyond the banner’s surface and dig deep into the very foundation of the edifice—and humanity—itself.

Human history is laced with abject brutality, repeats itself over and over again, and is filled with in-your-face contradictions that can rattle the mind, annul deep-rooted beliefs, and challenge convictions believed impenetrable. On the other hand, art can do the same thing but often with a gentler touch and with a more positive-lasting effect. And while it’s true that some art may be unsettling, disturbing, and even offensive, no matter how Avante Garde, it will never charge forth with muskets and bayonets drawn. Art’s conjectured threat is on the mind only, and often it is self-imposed. Its provenance may at times have spilled blood, but its very raison d’etre has never been to draw blood. Art is there to elevate, to lift the spirit—or as a warning: to exalt or to humble. And to encourage out-of-the-proverbial-box thinking, especially in the contemporary age. Great art can realign one’s rightful place and purpose in this world. It is why people get lost in books, transported by music, or mesmerized by images. It is why humanity has always attempted to separate itself from itself; a peaceful solitary walk surrounded by nature, solace through meditation, chanting of hymns at church, repetitive prayer at the mosque or synagogue—to distance oneself from temptation and wrongdoing because man knows all-too-well, intrinsically so, that evil is not easily fooled and that being good (like staying positive) requires a tremendous amount of conscientious effort. And that the creation of art is no different than the constructing of civility or making amends—it takes time.

In Dante Alighieri’s 14th-century epic poem, Divine Comedy, Satan, aka Lucifer, is banished to Inferno (Hell) for his sin against God. Lucifer, boldly if not moronically, tried to usurp God’s power. Wrong move. At one time, Lucifer was the Angel of Light and God’s right-hand numero-uno cheerleader. Just as Benedict Arnold was to George Washington during the American Revolutionary War and before the former’s name became synonymous with being a traitor. History is littered with people who have made horrible decisions and who have fallen from God’s grace—and man’s. Making poor decisions is in humanity’s DNA. But so too is the power to redeem. And to forgive. In Dante’s world, Hell is reserved for those who never asked to be forgiven, who sought no redemption, and for “those who have rejected spiritual values by yielding to bestial appetites or violence, or by perverting their human intellect (the faculty of thinking and acquiring knowledge) to fraud or malice against their fellowmen.”

Often, a hero emerges in history’s pages that distinctly manifests the struggles of the self or, more complexly, the opposing forces that perhaps, divinely motivated, are to be construed as important reminders, life lessons, of whom we follow. And why we all must act on our own intelligence and accord. To many, the Jamaican-born black nationalist and Pan-Africanist, Marcus Garvey was a great orator and political activist who inspired the African diaspora to stand up against oppression and take charge of their lives. To others, he was a charlatan accused of defrauding thousands of his followers, someone who lobbed racial slurs in court when convicted, and who angered many in his community after aligning himself with—of all groups—the KKK to advance his agenda. Garvey was, simply put, a polarizing force and a man of many contradictions. Those in favor of the man will never cancel him. His message is and was far greater than the messenger, they might say. In truth, it was a Marcus Garvey speech given in 1937—the same year Hitler unveiled Nazi Germany’s first monumental structure of Nazi architecture and propaganda, the Haus Der Kunst, originally called Haus der Deutschen Kunst (House of German Art)—that years later would inspire the world-beloved Bob Marley to write his most famous tune, Redemption Song.

In Garvey’s words, spoken at St. Phillip’s African Orthodox Church, in Sydney, Nova Scotia, a place where thousands of slaves (both freed and escaped) migrated during the American Revolution, you can hear Bob Marley’s voice:

“We (Africans) are going to emancipate ourselves from mental slavery because while others might free the body, none but ourselves can free the mind. The mind is your only ruler, sovereign. The man who cannot develop and use his mind is bound to be the slave of the other man who uses his mind …”

With that, we return to Mel Bochner, a Jewish-American (b.1940) whose intellect has formed the basis of his art practice since the early ’60s and whose latest installation in Munich (a reboot to an earlier showing of the same piece at the same place in 2013) of a word-chain of colloquial Yiddish terms called The Joys of Yiddish that would, no doubt, have Hitler and his cronies rolling in their graves. The words themselves, KIBBITZER, KVETCHER, NUDNICK, NEBBISH, NUDZH, MESHUGENER, ALTER KOCKER, PISHER, PLOSHER, PLATKE-MACHER and their meaning (wise guy, chronic complainer, nag, sad-sack, pesterer, crazy man, crotchety old man, callow person, blowhard, troublemaker) carry less significance to this writer than the lingua they’re printed in and the building they’re placed on when we accept two very important historical facts here.

The first is that Yiddish originated in Central Europe, especially in towns along the Rhine River (the longest river in Germany) starting in the 9th century, that it’s a High German-derived language combining the Hebrew, Aramaic, and Slavic languages and was spoken primarily by the Ashkenazi peoples of this region. Ashkenaz, in fact, is the medieval Hebrew name for Northern Europe and Germany. And the Rhineland, in Western Germany, was the center for the Ashkenazi. To even think that eighty-five percent of the six million Jews who perished in the Holocaust were Yiddish speakers, annihilated in the land that bore them this unique tongue lends unfathomable gravitas to Bochner’s piece atop the Haus Der Kunst.

The second historical fact, and this is quite ironic as well, is that the building’s inaugural exhibition, the Große Deutsche Kunstausstellung (Great German Art Exhibition), was supposed to be Adolf’s great art-show-triumph and glorious counterpunch to the other major show happening in Munich at the same time, Die Ausstellung Entartete Kunst (The Degenerate Art Exhibition) which, not surprisingly, was attended by more people than the Great German Art Exhibition. A lot more. People, after all, will always want what they’re told they can’t have. Because when Hitler came to power in 1933, he and his National Socialist German Workers’ Party were going to tell everyone what they could or couldn’t see and enjoy, and immediately began targeting all the people and cultural institutions who they believed insulted their culture and sentiment—art and artists they perceived as threats to Germany. Their goal was simple and sweeping: to cleanse German culture of degeneracy. But who is to be the great arbiter of taste and decide what is degenerate and what is not? Well, under a Fascist regime, that’s easy. Welcome to the beginning episodes of Nazi Germany’s Got Talent with Adolf Hitler as Simon Cowell. And Joseph Goebbels the original Heidi Klum. And sometimes, they disagreed. Goebbels actually liked some of the Expressionists. But Hitler would have none of it. So paintings were destroyed, books were burned, and teachers and faculty at art schools and cultural institutions were fired and replaced with loyal Nazi party sympathizers—the chutzpah.

The reconciliation process after the war has not yet ceased. And the chilling memories of it linger: the yellow and black in Bochner’s banner recall the Star of David badges and armbands given by the Nazis to stigmatize and alienate the Jews from their birth home. Perhaps the yellow can be seen as a new dawn and with it a prevailing sense of eternal hope. Because in this case, at this place, the Haus Der Kunst is playing a far more significant role than the mere host. Their acceptance of the banner, particularly its installation on their home facade, must be seen as one of the greatest public asks of forgiveness ever. It is a smudging of sorts, minus the sage. Here and now, the intention and attitude of both the artist and institution have aligned most spiritedly to conjure not just reconciliation between past artists and institutions but redemption amongst common peoples living today: flaws and all. Humanity begs our understanding and tolerance of this. Or it will be repeated. —Gregory de la Haba

Can you see the Equations? An interview with London Tsai 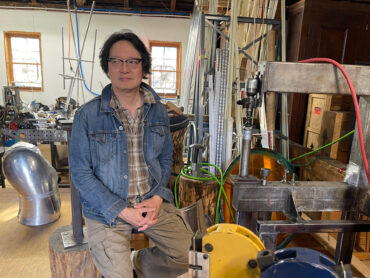 Can you see the Equations? An interview with London Tsai

The iconic images of dinosaurs that we know and love, the model of our Solar System, the globe,. Continue reading 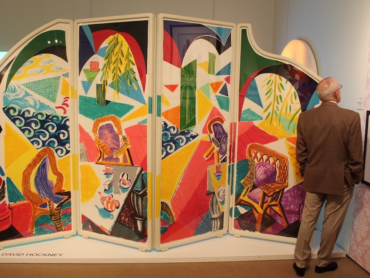 A Comprehensive Plan for Your Art Collection

A Comprehensive Plan for Your Art Collection As someone with a passion for art, you’ve got a better. Continue reading 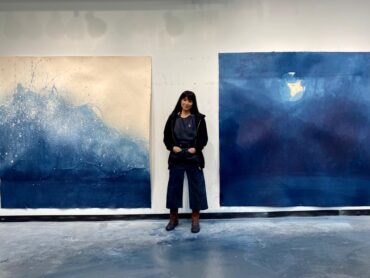 In anticipation of her upcoming LACMA show, Portray Magazine was invited to take a first look at Miya’s new. Continue reading