Then can I walk beside you

I have come here to lose the smog

And I feel to be a cog in something turning

Well maybe it is just the time of year

Or maybe it’s the time of man

I don’t know who l am

But you know life is for learning

And we’ve got to get ourselves

Back to the garden.

Could the times be any stranger? Joni Mitchell must have wondered as she wrote these lyrics for her musician friends headed to Woodstock—a concert she missed but watched on live TV back in New York City. Yes, I want to reach across the past half-century and tell her. There are stranger times ahead.

It is July of 2020, and the first piece you encounter in The Garden of Friends exhibition at the newly reopened Leiber Collection Sculpture Garden tells you everything you need to know about the world you left behind—the one just outside the garden walls, where most of us, despite our differences, wake in the morning, sleep in the nighttime, and, in between, are ravaged by the horrors of the 24-hour news cycle.

Three folding chairs—the kind one might associate with AA meetings in church basements or school cafeterias, depending on one’s proclivities—wrapped in police caution tape and stenciled with three red words: YESTERDAY. TODAY. TOMORROW.

Deceptively simple, the artwork is arresting in its acknowledgment of the moment we’re all suspended in together—a time in which words like “woke” and “triggering” have taken on new meaning. The piece carries the echo of another three words that will never sound the same: I can’t breathe. I tear up, just looking at it. This is why I came to the garden. To feel things. To reflect.

I see Toni Ross and say hi, shyly, worried she might not remember or recognize me with my mask on. I wrote about a previous work of hers for my colleague James Salomon (we’re at it again, collaborating on this article: his images, my words). It was a catalogue essay for a show he curated in the Berkshires, another garden exhibition where Toni’s stunning site-specific intervention involved tree bark painted with gold leaf. It’s been two years since that show—what now feels like a lifetime ago.

My husband is with me as we tour the outdoor exhibition. At a distance, I see the masked outline of Bastienne Schmidt and wave. She is standing beside her piece—a large scale work, light-hearted, even silly—imagine Claus Oldenburg designed a set of soft, larger-than-life, strike-anywhere matches and planted them head up in a spiral formation like children in a game of ring around the rosie, the colorful match heads drooping slightly like unwatered lilies. The work is nestled perfectly in a small clearing. I ask if the artists were assigned their locations. Bastienne confesses they weren’t…but that she made sure to arrive early. “Artists are space hogs,” she laughs, and I laugh too. This is why I came to the garden. To laugh.

She points out Peter Dayton’s piece, though I would have known it anywhere. I first wrote about Dayton’s art when I reviewed Color Pop, a group show curated by Coco Meyers whose popup exhibition series gives contemporary East End artists their due. Dayton’s works were rocket-like objects which he claimed were “pointing toward our future”—a future it seemed he wanted us to question, even then. In contrast, his contribution to this exhibition consists of three painted pieces of wood set against a large, imposing tree trunk like the rickety legs of a tripod as though to brace the tree on which they lean. I come in close, and see that the colorfully painted lines are chipping away, and I’m reminded of another thing I love about Peter Dayton: what I like to call his: “punk rock sensibility,” a reminder that things that happen quickly often possess an unexpected staying power. This is why I came to the garden. To witness the passage of time.

Nearby, Almond Zigmund’s rubber band-like red sculpture draws my gaze up toward the canopy, stretched between two tall trees, playing with tension, space, texture, light, shadow, and of course, color, like nobody but Almond can. I had the pleasure of walking through the desert in Santa Fe with Almond last year. We were on a pilgrimage to interview her former professor Dave Hickey for a documentary film. Almond had recently returned from Joshua Tree, where she collaborated with a friend on a series of colorful site-specific interventions. I had seen the pictures on Instagram and was hungry to learn more. She described her process as we hiked to the petroglyphs. You could see her mind in motion as she shared her vision, a melded understanding of the relationship between untamed wilderness, palette, and material. I imagine it is what Andrew Byrd might sound like describing his choice of instrumentation. There is a kind of inevitability about it, and in Zigmund’s case, a sense of arrival from which you can’t quite look away.

Down the path, Saskia Friedrich’s black painted wood sculpture asserts itself like a larger-than-life, steel black Matisse cutout, and the eye is drawn to the negative spaces punctuating the surrounding lush gardens—the dark, curved-line shadows running along the stems of flowers, under the budding blossoms of flowering bushes, between the leaves. I recall my father telling me when I complained of boredom as a child to “go outside and count the spaces between the leaves.” This is why I came to the garden. To remember my childhood.

A grove of trees features an installation of photographs by Jeremy Dennis, whose exhibition for the Parrish Art Museum’s Road Show at Arts Center at Duck Creek turned heads throughout the East End in the summer of 2018. Dennis is a member of the Shinnecock Indian Nation, a federally recognized tribe in Southampton. His photographs, installed in a ceremonial circle, reimagine indigenous experiences, mashing together dreams and myths and oral traditions like a young maestro, mixing it up for a new generation navigating forces of assimilation, identity politics, and self-determination in the post-digital age.

Other photography gems include Jill Musnicki’s 8-foot photograph of a fox printed on fabric and mounted in a garden shed, boldly staring at its audience, neither hunting nor hunted, with a perfect mixture of curiosity and ambivalence. Also, a photograph by Pipi Deer mounted on a brick wall. I once wrote about Pipi’s work for Hamptons Art Hub, a review of a group exhibition she was in at Janet Lehr Gallery for which Ms. Lehr challenged her artists to “Think Red.” The piece Deer has in the current exhibition, “dresser,” conveys a similar sense of timelessness in a setting I once described as a brothel in an abandoned mining town. However, unlike the subject of her earlier photograph which seemed to be dancing beside a fallen rose, the subject of this much larger photograph is trudging through a field, burdened with a heavy dresser hoisted on their back. A poignant, poetic scene that speaks powerfully to the weight of the times.

Winding back through the gardens, we pass several more joyful, inviting artworks: Philippe Cheng’s aluminum Cadence—part undulating wave, part snake-in-the-grass; Conrad de Kwiatkowski’s totemic Phoenix Rising of burnt wood and glass; Jeremy Grosvenor’s bright blue Safe Passage—a terminal for birds; Christine Sciulli’s Desert Bloom, a poetic installation of 44 compact discs of the artist’s own archives floating in a fountain—a reflective work in every sense of the word; Bill Stewart’s Articles of Geometric Progressions, perfectly delicious forms as delightful as any garden treasure one might hope to find: a seed pod, a walnut shell, a hive. Our feet grow tired as the day grows late, and we find ourselves chasing the light to revisit our favorites. And this is why I came to the garden. To rest, walk, grow weary, and leave. To one day, get myself back.

A few weeks have passed, and the pandemic rages on—worse, now, in other parts of the country. My mind, filled with questions about schools reopening and how to safely continue social distancing while remaining connected to friends and culture. The trip around the garden remains a summer highlight, even as the short-season nears its end. I feel a wave of gratitude toward the artists who made the work, toward the Leibers who left the garden for us to enjoy, toward the curator Ann Fristoe Stewart who acknowledged that “even though we must stay distant from our friends right now, we can all feel more connected to one another through art.” I’m grateful for all of it: the assertion of our shared humanity, and the underlying expression of hope.

As I write this from my home office, a tropical storm ravages the coastal canal outside our window. My husband shuttles in the potted plants and secures the deck furniture. Each time the door opens, the wind howls like an army of ghosts. The kids are called inside: where it is safe. From the windows, I see the tall sea grasses undulating in the gale-force winds, and the mother in me worries about the plants in the garden and the works about which I have been writing: have they been secured? are they safe? For no reason at all, I open a bookmarked video a friend shared of Joni Mitchell performing Woodstock live in 1970, tossing back her straw blonde hair, all broad grin, and overbite, a young woman singing a song she wrote that would define her generation. She is nearly 77 now and still with us. One day, her teeth will rattle below the earth, her golden hair, her music and mind, and everything else, the stardust it is and was and always will be, gone back to the garden as we all must do. One day, but not yet.

Author: Kelcey Edwards is an award-winning filmmaker, published author and curator. She holds an MFA in Documentary Film from Stanford University and is the founder of Iron Gate East, an exhibition series based in the Hamptons and New York City. She is currently directing a documentary feature on the contemporary art world titled BEGINNING OF THE END with the producers of the Emmy nominated HBO documentary THE PRICE OF EVERYTHING.

Alone With a Master Painter: Art Notes from the Hamptons

Kelcey Edwards is an award-winning filmmaker, published author and curator. She holds an MFA in Documentary Film from Stanford University and is the founder of Iron Gate East, an exhibition series based in the Hamptons and New York City. She is currently directing a documentary feature on the contemporary art world titled BEGINNING OF THE END with the producers of the Emmy nominated HBO documentary THE PRICE OF EVERYTHING. 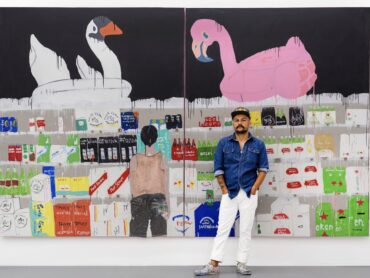