It is probably wrong to call Art Karlsruhe an emerging art fair, it certainly has that charming atmosphere. With slightly more than 200 galleries out of a dozen or so countries near Germany, Art Karlsruhe featured a lot of international artists in this 12th edition of the show. Last year only 180 galleries attended, so the trend is obvious. You can’t  compare Art Karlsruhe to Art Basel, this media-crazed frenzy of the international art world. The general flair of Karlsruhe is understated, relaxed and surprisingly wide ranged thematically, with sculptures, photography, paintings and installations are the dominant species of this contemporary and modern art jungle.

As a regional highlight the show has regional sponsors and guests, German being the number one language spoken there which is a clear signal and you are right to wonder what will happen to the show if it becomes more international. The prices will certainly not remain at their current user-friendly level.
True, there are some multi million Euro pieces there as well, and the funny thing is that the German South West has the highest density of art collectors nationwide. This is due to to the industrial strength of Baden Württemberg, Porsche, Mercedes and Bosch come to mind, private banks and manufacturers of consumer goods like Ritter Sport chocolate all come with their own museums and top notch art collections. There is a lot of money in this region. This and the fact that the fair’s four gigantic halls provide lots of room and air is what makes Art Karlsruhe a unique, friendly and positive experience.

Art Karlsruhe offers the prestigious Loth Sculpture Award, sponsored by L-Bank: 20.000 Euro went to Werner Wohlhüter’s gallery and their artist Jörg Bach. Among the 50.000 or so visitors (mainly from Germany, Switzerland, Holland, France, and Belgium) we saw Markus Lüppertz, Jan Zöller and Leon Löwentraut (Geuer, Düsseldorf) who seemed to feel quite at home at the show. German art wunderkind Löwentraut announced his new series on opening day, “you have seen nothing yet”, the 20-year-old announced, “the new series is going to be simply decadent.” Also shown at Geuer was fantastic from Danny Minnick (below)

One of the most important galleries was perhaps Galerie Schlichtenmaier out of Stuttgart who celebrates their 50th anniversary this year. Their portfolio ranges from Willi Baumeister to Adolf Fleischmann and Walter Stöhrer. Of course, you might find Picassos, Francis Bacon, Paul Klee, Koons, and Twombly there as well but this isn’t the reason why people come. It is the distinct regional flair that makes Art Karlsruhe so interesting.

Galerie Ludorf, Düsseldorf is a regular exhibitor. This year, they featured Karin Kneffel, a student of Gerhard Richter’s, certainly an artist for your watch list.
“We are not primarily interested in the established art market and its institutions,” Britta Wirtz, CEO of Art Karlsruhe said, “we are all about passion and inspiration. This is what makes us stand out. This year our objective is to create new art collectors.”
One obvious gateway drug is photography, another prints, so the second award offered during Art Karlsruhe is for art and calligraphy. It went to Monica Bonvicini. German pop artist Jim Avignon was particularly happy, as he sold out his booth on the first two days. “I expected to sell five pieces per day, but we sold twenty mainly to first time buyers.” The next show in Karlsruhe is February 13th-16th 2020.AB

Tefaf 2019- From New York To Maastricht 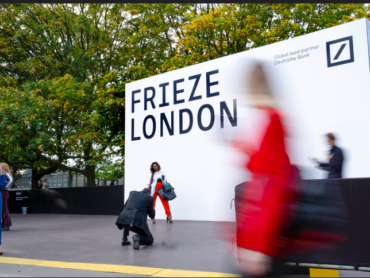 Frieze revealed highlights for both Frieze London and Frieze Masters 2022. Together, the two events. Continue reading